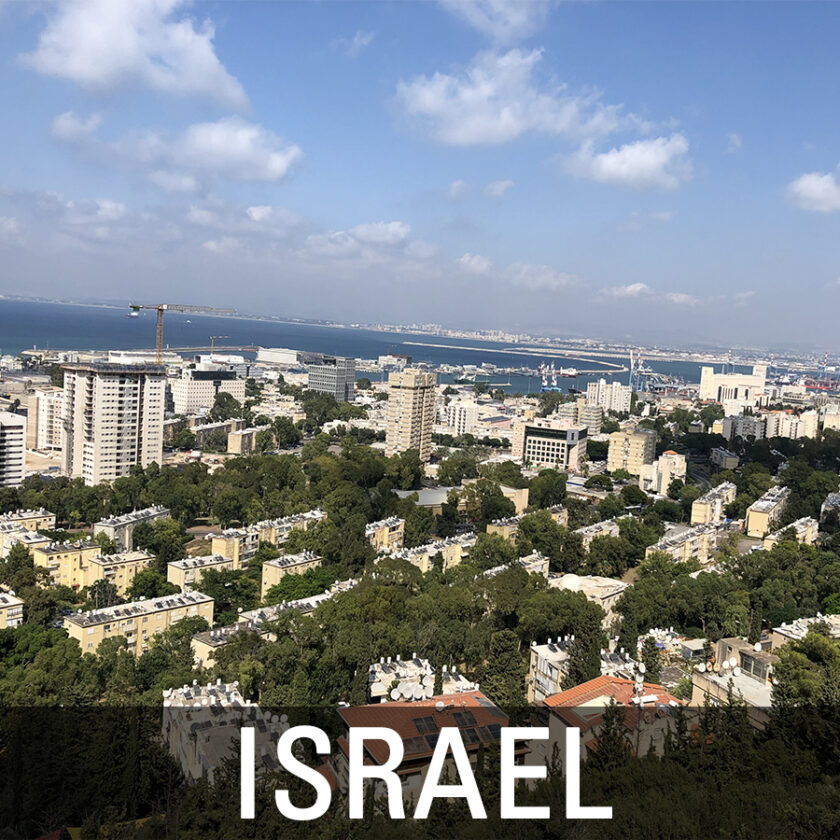 Haifa is a beautiful city in Northern Israel. Located on the Mediterranean Sea, Haifa is surrounded by beautiful beaches to the west and sits on part of Mt. Carmel to the east. This is the Mountain on which Elijah called down fire and God turned the hearts of His people back to Himself in Kings 18. Today, the false religion the Baha’i Faith (a breakaway from Islam) has its world headquarters in Haifa. They are allowed to run their administrative offices in Haifa, but are not allowed to proselytize there. On a side note, the Baha’i Gardens in the middle of the city are absolutely beautiful.

While in Haifa, I visited a large mall on the outskirts of town. Later I was told that it was once hit by one of Saddam Hussein’s Scud missiles. The house we stayed in had its own bomb shelter.

Humus and Falafel restaurants must be visited in Haifa. My personal favorite is the Humus (pronounced Hūmūs). Be careful when you go to Pizza Hut. Some of the restaurants are kosher and will not serve pepperoni!

Haifa is known as a city where many religions live together in relative harmony, especially considering its neighborhood (86 miles from Lebanon). Orthodox and secular Jews, Arab Christians and Muslims, Baha’i and Druze all live and work in Haifa. The Druze are another sect of Islam which is particularly despised by its “mother faith.” Devout Druze believe that the Messiah will be born to a man. Therefore, the men wear very baggy pants so that if a baby is suddenly born to them there will be room for him to survive within his garments. While in Haifa, we had a group of Druze construction workers ask us about what it is like in Protestant Christian services. Great opportunity!

Haifa struck me as a city full of “beliefs.” Everyone thought many things, but no one knew anything for sure. So much religion, but few if any really knew God. We have to bring the gospel in its fullness, the Word and Spirit of God to this and all of the cities on this list.

In the cities and villages of Galilee where Jesus ministered (about an hour from Haifa), statistics show that as few as 1 in 200 people are born again. In the USA it is closer to 1 in 5. And here is the reality. Approximately two million Christian tourists visit Israel every year, which is wonderful See: (https://www.haaretz.com/israel-news/.premium-israel-is-welcoming-record-numbers-of-tourists-and-it-s-a-nightmare-1.5869097 and https://www.israel21c.org/top-10-christian-sites-at-the-sea-of-galilee/). Bus loads pass through the region of Galilee to commemorate Jesus’ life. And that is wonderful. In fact, so many Americans are among them that many tourist shops price their products PRIMARILY in US dollars. At the same time, the towns that they drive past, where Jesus lived and ministered are almost completely void of any living Christian witness. The Lord Himself said, “…for truly, I say to you, you will not have gone through all the towns of Israel before the Son of Man come,” Matthew 10:23. We must reach them! We must get the truth of the gospel to these places. What is your part? You can make such a difference!